I formally joined the Institute of Social Science (Shaken) as a project researcher in April 2012, working on Prof. Suehiro’s KAKEN Project on social security and employment in East Asia. However, Shaken has been the base of my education and research since 2006. In my graduate school days from 2006-12, I was fortunate enough to attend the seminars of three Shaken professors: Prof. Suehiro Akira（professor of Gakushuin University as of 2018）, Prof. Tajima Toshio（Professor Emeritus of the University of Tokyo） and Prof. Marukawa Tomoo. I also worked part-time as a research assistant for the Contemporary China Research Base at Shaken from 2010-2012. Thanks to the rigorous academic advice and kindness in daily life I enjoyed from Shaken professors and colleagues, I was able to continue my research on China’s agribusiness and rural development before taking the position of assistant professor at the Institute for Advanced Studies on Asia at the University of Tokyo in 2013.


Prof. Tajima gave part of his collection to me
upon his retirement. I also keep large number
of books in my office now.

Most of my memories of Shaken go back to when I was a graduate student conducting research on China’s corn industry. I still remember the first time I entered Prof. Suehiro’s office on the 2nd floor. His office was full of books. I could barely find the professor behind the aisles of bookshelves. I thought he must be unusually fond of collecting books, until I entered Prof. Tajima's office later that year. His collection was no smaller than Prof. Suehiro’s.
Prof. Tajima’s office on the 7th floor was a fantastic library on China’s economy. Some of my happiest moments there were when I had to jump over a pile of books to reach the bookshelf I wanted to check. Books I borrowed from the professors were those could not be found at university libraries or online. I believe students like me benefitted the most from these professional book collections.

Most of the professors and senior researchers I met at Shaken conduct extensive fieldwork. Shaken professors are always willing to share their know-how and networks with young scholars. There is also an open atmosphere among young scholars to share our ideas and field stories. While more and more works on economics are done utilizing secondary data, I continue conducting fieldwork following the research style which Prof. Suehiro described as “research should be done on foot (研究は足でやる)”.

In October 2012, Prof. Tajima and I launched a research project on China’s Dry Bean Industry, aiming to reveal the production and market structure of miscellaneous beans (zatsumame 雑豆, beans other than soy). Zatsumame only account for less than 1% of China’s total grain production, but it is the only group of grains of which the market was liberalized from 1980s. Because of zatsumame's comparatively small production and high data restriction, even scholars in China were deterred from entering this field. But Shaken’s network made it possible!


Under Prof. Tajima's lead, a research team named中国雑豆研究会 including young scholars and graduate students was established in November. In the winter of 2012, Prof. Tajima and I visited fields in Hokkaido, Beijing, Jilin and Inner Mongolia. Five months later, with support from the Contemporary China Research Base, we published Production, Distribution and Trade of Legumes in Northeast China (Toshio Tajima & Xin Yuan Zhang ed. ISS Contemporary Chinese Studies, No.12, 2013). 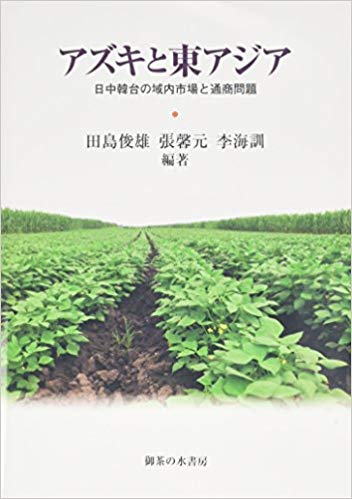 In 2013, our project members conducted more field research, covering not only Northeast China, but also Tianjin, Shaanxi and Taiwan. Chinese government officials at various levels offered their comments on our works. In 2016, Adzuki and East Asia was published (Toshio TAJIMA, Xin Yuan ZHANG, Haixun LI ed. Ochanomizu Shobo, 2016). At the end of 2016, the word zatusmame(雑豆) appeared for the first time in CPC No. 1 document (中共中央1号文件). Zatsumame were recognized as one of the effective alternatives to adjust China’s overcapacity in corn production.

I completed the final draft of my Ph.D dissertation and obtained my degree while working at Shaken. In October 2013, I left Prof. Suehiro’s office for a new job as assistant professor at Institute for Advanced Studies on Asia. In April 2016, I started to teach at Yokohama National University, offering lectures on Global Economy to students at the Graduate School of International Social Sciences and Department of Economics. This year there are students from 11 different countries taking my courses. The things I learned at Shaken, such as the interdisciplinary approach, the know-how on fieldwork and academic analysis, have now become my strengths in teaching as well!

The Golden Monkey by Chinese artist Wang Kuokuo(王 阔阔). I brought this painting back from Hong Kong. Decorative and sentimental, it fits perfectly in my living room. Now coffee time at home is even more relaxing under the monkey's soothing gaze.